Frederica curated a show by inviting writers/artists to explore 2 and 3 D art using words. Poetry on rocks and shells, haiku hanging from a ladder and more! Everyone is invited during library hours. 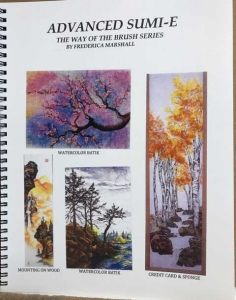 Advanced Sumi-e, Frederica’s newest book in The Way Of The Brush Series, has covers in color to refer to the techniques inside. Ancient and modern painting methods include suminagashi, tarashikomi, gong bi, watercolor batik, mounting on foam core, wood and canvas.

This is an exciting workbook to explore experimental sumi-e art. Click to purchase Advanced Sumi-e.

Sumi-e Exhibit and Sale of works by Frederica, Mary Gray and Mike De Matteo at Blue Hill Library for the month of October. Everyone is invited! 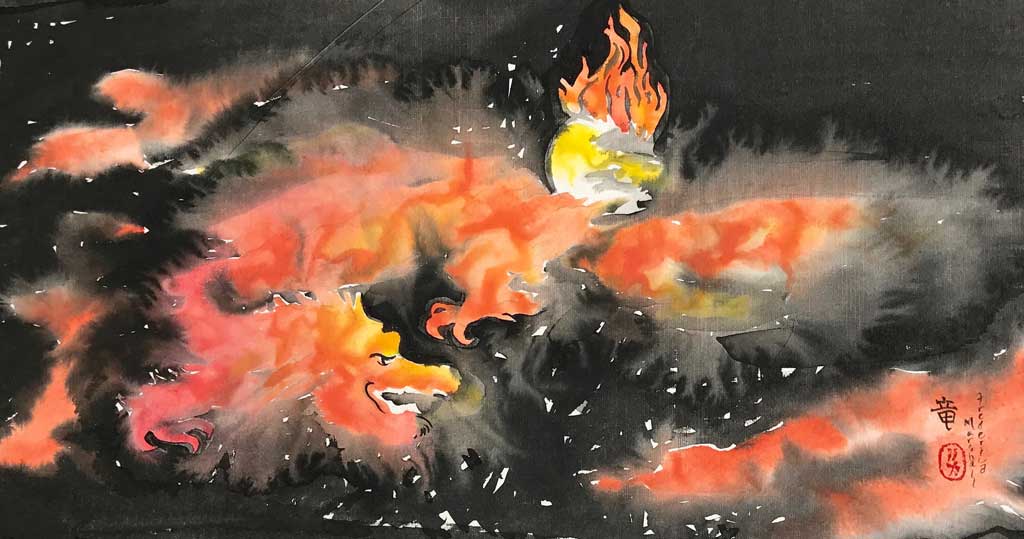 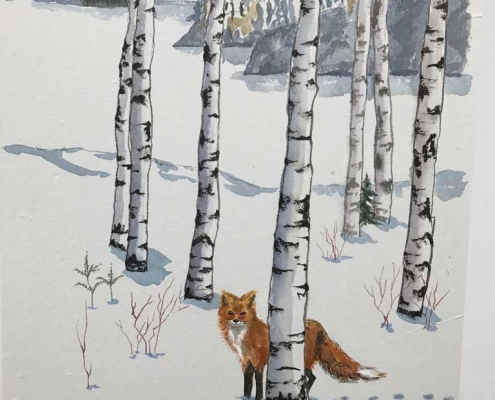 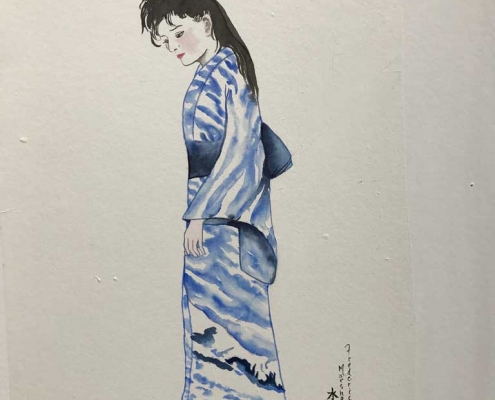 Sumi-e demos will be on going 1:00 – 4:00 at Frederica’s studio, May 19th, during the Wings, Waves, and Woods Festival in Deer Isle. Stop by and visit the gallery and the studio! 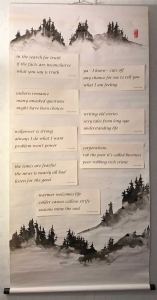 The Haiku Project is a group of local poets who write and meet about haiku poetry. We have linked our poems into Renga – longer length groups of haiku, and mounted them on to 14 painted scrolls.

There will also be a display of traditional Japanese clothing from Frederica’s collection at the library May – July.

Deer Isle artist Frederica Marshall will present two exhibits at the Blue Hill Public Library in May, an exhibition of Renga Scrolls in the Britton Gallery by herself and her students as part of the “Haiku Project,” and a display of traditional Japanese clothing in the Howard Room glass cases. The public is invited to a reception for the shows on Friday, May 18th from 5:00 to 6:30 PM.

Renga are groups of haiku written about one theme. Frederica and her Haiku Project students organized haikus they had all written into themes, and arranged them into longer poems that were then written onto scrolls with motifs painted in sumi ink by herself and her student Mike De Matteo. This exhibit will be in the Britton Gallery during the month of May.

The display of traditional Japanese clothing include an embroidered wedding kimono, shibori haori jackets, silk obi belts, brocade geta and hairpins, all items collected by Frederica when she lived in Japan. This display will be in the Howard Room cases for the months of May through July.

Frederica grew up in Japan, and lived there for 28 years. She studied brush painting, Ikebana flower arranging, calligraphy, Bingata textile dying, pottery and language. She has exhibited her work in Japan and the US in more than 100 group shows and 28 solo shows. She is an artist, teacher and researcher. She has a BFA in Painting from Miami University in Ohio and an MA in Art Education from Michigan State University.

Way of the Brush 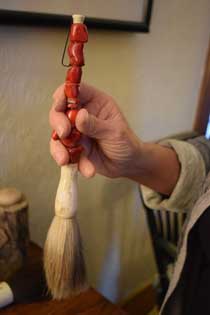 In Japan, the fabrication of paintbrushes is an ancient craft steeped with tradition and history. PHOTO BY JENNIFER OSBORN

Frederica Marshall’s largest paintbrush, made of wood and four horsetails, stands at about 64 inches, taller than she is.

The horsehair brush looks like a witch’s broom, and while heavy, it moves easily.

In her 57 years as an artist and master Japanese sumi-e brush painter, Marshall has collected more than 500 brushes.

“My husband and I call ourselves tool gatherers and skill learners,” the Deer Isle artist said. “We’re really fortunate because we both understand the need to create. We have a rule that tools don’t count. Buy what you need.”

All those brushes, in Marshall’s skilled hands, have created countless works of art, which are included in private collections in Australia, Europe, Japan and the United States. Read more… 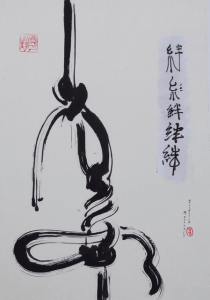 “Knot” by Frederica was chosen to be in the Calligraphy part of The National Sumi-e Exhibit in Tallahassee Florida by judge Nan Liu. The exhibit will be at Le Moyne Center in Tallahassee July 7-29 2017.

“Moonlight” was chosen for the painting section of the exhibit. 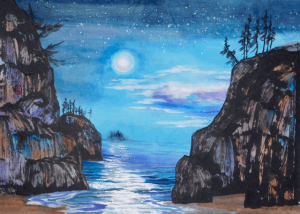 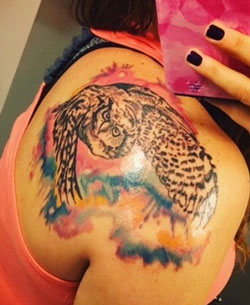 Stephanie M. asked for permission to have Frederica’s sumi-e owl painting tattooed on her shoulder! 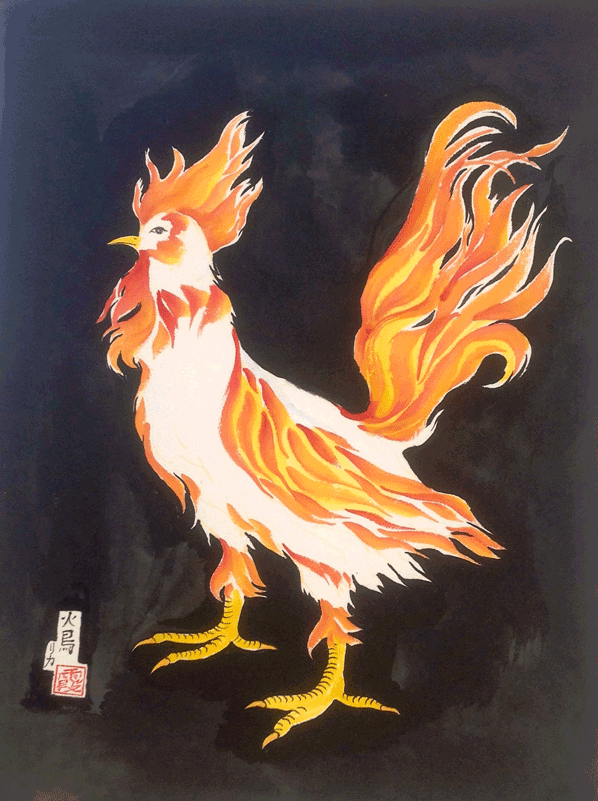 Frederica & Herman’s Asian Pottery collection is on display at Blue Hill Library for June and July 2016. Please come view it! 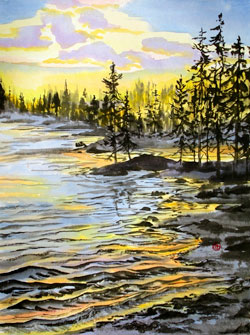 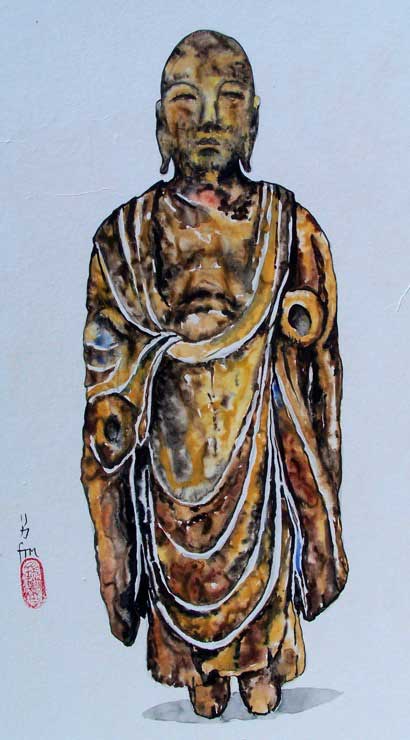 Frederica’s painting “Impermanence” has been selected for the 2014 Annual Juried Exhibition of the Sumi-e Society of America. The exhibit will be held Sep. 6 – Oct. 20, 2014.

Impermance. The painting is 24″ x 16″ and is done in the tarashikomi technique of painting with water on sized paper then touching color and ink to the wet area. Small lines of dry paper allow the definition of the shapes in the painting. This was inspired by a sculpture I studied in The Brooklyn Museum of Fine Art in New York on a recent trip there.

Selected for the 2014 Sumi-e Exhibit at the Portsmouth Arts & Cultural Center in Portsmouth Virginia.

Island Reflections, a solo show of recent paintings by Frederica Marshall, will be exhibited September 10 – October 1 at the Pearson Legacy Gallery (open daily 11:00 a.m. – 5:00 p.m.). The opening reception will be 3:00 – 6:00 p.m. on September 10. The new works reveal a greater fusion of Western and Asian painting techniques and compositions. Celebrating 10 years of living on Deer Isle, the artist feels she has developed a deeper understanding of the natural environment and energy of her beautiful surroundings.

At 7:00 p.m. on Thursday, September 25, Frederica will present The Evolution of American Watercolor Painting, a slide lecture on the history and changing use of watercolor painting from the 1800s to modern times. 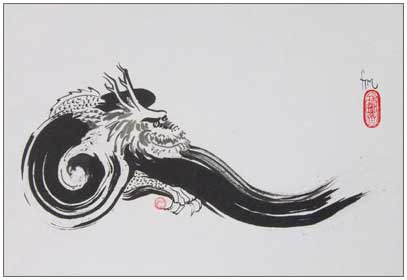 Frederica’s painting “Dragon” has been selected for the 2011 Annual Juried Exhibition of the Sumi-e Society of America. The show was judged by Dr. Kan Kit-Keung, the best Asian brush painter in America.

The invitational juried 2011 International Sumi-e Exhibition accepted “Long View,” a painting of birch trees and a canoe by Frederica Marshall. It will be mounted on a scroll and shown at the Tokyo Fine Art Museum in Japan. The exhibit will be shown 2011-2012 and will travel to Osaka and Taipei, Taiwan. The painting is done on washi paper with sumi ink in the classical style.

This site uses cookies. By continuing to browse the site, you are agreeing to our use of cookies.

We may request cookies to be set on your device. We use cookies to let us know when you visit our websites, how you interact with us, to enrich your user experience, and to customize your relationship with our website.

Click on the different category headings to find out more. You can also change some of your preferences. Note that blocking some types of cookies may impact your experience on our websites and the services we are able to offer.

These cookies are strictly necessary to provide you with services available through our website and to use some of its features.

Because these cookies are strictly necessary to deliver the website, refuseing them will have impact how our site functions. You always can block or delete cookies by changing your browser settings and force blocking all cookies on this website. But this will always prompt you to accept/refuse cookies when revisiting our site.

We fully respect if you want to refuse cookies but to avoid asking you again and again kindly allow us to store a cookie for that. You are free to opt out any time or opt in for other cookies to get a better experience. If you refuse cookies we will remove all set cookies in our domain.

We provide you with a list of stored cookies on your computer in our domain so you can check what we stored. Due to security reasons we are not able to show or modify cookies from other domains. You can check these in your browser security settings.

We also use different external services like Google Webfonts, Google Maps, and external Video providers. Since these providers may collect personal data like your IP address we allow you to block them here. Please be aware that this might heavily reduce the functionality and appearance of our site. Changes will take effect once you reload the page.