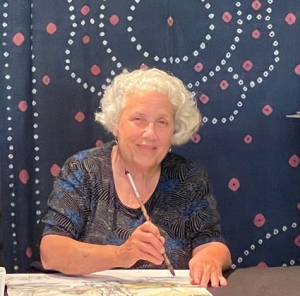 Frederica Marshall, Master Brush Painter, artist, teacher, researcher, and author, lived in Japan for 28 years. She received a B.F.A. in Painting from Miami University in Ohio and an M.A. in Art Education from Michigan State University. She currently resides in Deer Isle, Maine.

She has exhibited in Japanese venues and galleries since 1973, including the Takumi Gallery, the Mikimoto Pearls Gallery, the Okinawa Civic Center and the International Ocean Exposition in Motubu. Her Sumi-e paintings were featured in a solo show at the U.S. Naval Gallery in Yokosuka.

Frederica’s works have been selected for numerous national exhibitions in the United States, such as those sponsored by the National Sumi-e Society at the Tweed Museum in Duluth, Minnesota and the Mobile Museum of Art in Mobile, Alabama. She received the Winsor and Newton Painting Award in Portsmouth, Virginia at the National Sumi-e Exhibition and was honored with the Traditional Painting Award at the National Sumi-e Exhibition in New York City. Her artwork has been included in notable group shows at the John and Mabel Ringling Museum of Art, the Plum Door Gallery, the Marie Selby Botanical Gardens and the Sarasota County Arts Council in Sarasota, Florida. Her work has been exhibited in more than 72 group shows and in 20 solo shows. Her paintings are included in private collections in Australia, Europe, Japan and the United States.

Frederica teaches Sumi-e and watercolor courses at her studio in Deer Isle, Maine, at art and educational institutions on Florida’s Gulf Coast and in The Republic of China. She is a member of the National Sumi-e Society, the Union of Maine Visual Artists and the Deer Isle Art Association and has served as President of the National Sumi-e Society, Sarasota Chapter and Vice President of the Down East Asian Art Society, Deer Isle, Maine and as Vice President of Ikebana International, Sarasota Chapter. 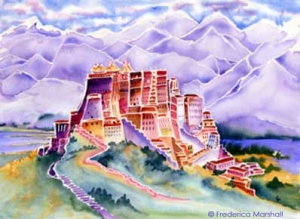 I am a visual person… sights, colors, shapes and aromas evoke images in my mind. Creating a meaningful work of art begins with the visualization of these images and culminates in the manifestation of those visions in the physical realm. My painting is also a form of meditation. During the creative process, I mentally “feel” textures and colors. Watercolor and ink on rice and watercolor paper provide the perfect vehicle for the fusion of Western and Eastern influences, as well as the blend of fusion of ancient and modern motifs that is the wellspring of my individual style.

The specific symbolism represented in my works flows from my travels, my studies in art history, anthropology, Asian philosophy and my own personal mythology. Sources for my subject matter include: indigenous cultures, landscapes, dreams, legends, beach combing and museum visits, among others. Inspiration is a vision …I “become” my chosen subject as I paint it. In this way, I evoke the essence of my subject by enveloping myself in the nature of its “being.”

Through my awareness of the spirit of nature — the subtle energies and abounding beauty in animals, plants, mountains and ocean — my paintings communicate the everyday miracles in the world around us. It is artwork intended not only for the eye, but also for the mind and heart.

This site uses cookies. By continuing to browse the site, you are agreeing to our use of cookies.

We may request cookies to be set on your device. We use cookies to let us know when you visit our websites, how you interact with us, to enrich your user experience, and to customize your relationship with our website.

Click on the different category headings to find out more. You can also change some of your preferences. Note that blocking some types of cookies may impact your experience on our websites and the services we are able to offer.

These cookies are strictly necessary to provide you with services available through our website and to use some of its features.

Because these cookies are strictly necessary to deliver the website, refusing them will have impact how our site functions. You always can block or delete cookies by changing your browser settings and force blocking all cookies on this website. But this will always prompt you to accept/refuse cookies when revisiting our site.

We fully respect if you want to refuse cookies but to avoid asking you again and again kindly allow us to store a cookie for that. You are free to opt out any time or opt in for other cookies to get a better experience. If you refuse cookies we will remove all set cookies in our domain.

We provide you with a list of stored cookies on your computer in our domain so you can check what we stored. Due to security reasons we are not able to show or modify cookies from other domains. You can check these in your browser security settings.

These cookies collect information that is used either in aggregate form to help us understand how our website is being used or how effective our marketing campaigns are, or to help us customize our website and application for you in order to enhance your experience.

If you do not want that we track your visit to our site you can disable tracking in your browser here:

We also use different external services like Google Webfonts, Google Maps, and external Video providers. Since these providers may collect personal data like your IP address we allow you to block them here. Please be aware that this might heavily reduce the functionality and appearance of our site. Changes will take effect once you reload the page.

The following cookies are also needed - You can choose if you want to allow them: